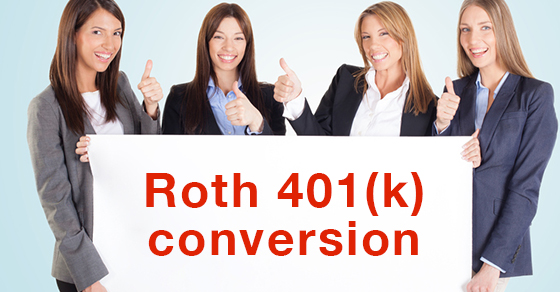 Could your company’s benefits package use a bit of an upgrade? If so, one idea to consider is adding an option for employees to convert their regular 401(k)s to Roth 401(k)s.

The ability to convert existing pretax balances within a 401(k) to Roth status was expanded by the American Taxpayer Relief Act of 2012. It’s generally easier for participants to start making after-tax contributions to Roth accounts within their 401(k) plans than it is to convert a significant existing pretax amount to the plan’s Roth component.

Why? Because, as with an IRA conversion, a Roth 401(k) conversion triggers tax liability that participants must pay on the conversion. If they need to raise the cash from retirement funds and they’re younger than age 59½, they get to keep only 90% of the amount after the 10% premature withdrawal penalty, less whatever amount regular income taxes take.

The initial financial hit of a Roth 401(k) conversion might appear to be a deal-breaker. Yet more and more plan sponsors are offering the option. One possible explanation for this is the rising number of working Millennials (roughly defined as those born between the 1980s and 2000s).

Converting to a Roth 401(k) makes sense for these younger participants because they have a longer period to build tax-free earnings on their contributions — despite the initial penalty. They’re also less likely to face the prospect of a big tax hit by converting an existing pretax 401(k) plan balance to a Roth account, because their existing balances are generally lower.

Giving employees the opportunity to participate in a Roth 401(k) plan may help them hedge their bets about the income tax environment they’ll face in retirement. And, as Millennials continue to hit the job market, you might draw better candidates when hiring. Please contact our firm for more information.